Simpson Thacher & Bartlett was Big Law’s top mergers and acquisitions adviser in 2022, expanding its share of the lucrative work even as deal activity dropped sharply from historic highs a year earlier.

The Wall Street law firm dominated the M&A league tables throughout the year, advising on 196 deals worth nearly $424 billion. Its lawyers worked on two of the year’s biggest deals, advising Twitter Inc. in its $44 billion sale to billionaire Elon Musk and representing Microsoft Corp. in its $69 billion all-cash acquisition of Activision Blizzard.

Global deal activity reached $3.6 trillion in 2022, down roughly a third from 2021. Simpson Thacher’s share of the market jumped to 17.1% over the year, up from 9.5% the previous year, according to Bloomberg data.

“We are gratified that our clients have continued to turn to us throughout the past year during what was a changing M&A marketplace,” said Eric Swedenburg, head of the firm’s M&A practice, in an email.

A slew of factors contributed to the overall decline in deals activity, said Frank Aquila, a senior M&A partner at Sullivan & Cromwell. Continuing inflation and central bank interest rate hikes to combat it put a damper on transactions, as did Russia’s war in Ukraine.

“These events conspired to make what was going to be a down year a fairly tepid year,” Aquila said. “Overall, it was a good year, but certainly not the year that it had been expected to be or it could have been,” he said.

Deals lawyers are entering the new year on an optimistic note. Some say they’re already seeing good signs and others expect deal activity to ramp up in the second half.

“Notwithstanding the interest rate increases, we are pretty certain that whether or not we technically have a recession this year in the United States, it will be fairly shallow and short-lived,” Aquila said.

Simpson Thacher topped the deals by volume by principal table every quarter in 2022, according to Bloomberg data.

In addition to the Twitter and Activision deals, the firm’s lawyers represented private equity firm Silver Lake, the second-largest shareholder of VMware, in the cloud-computing company’s $61 billion sale to Broadcom. 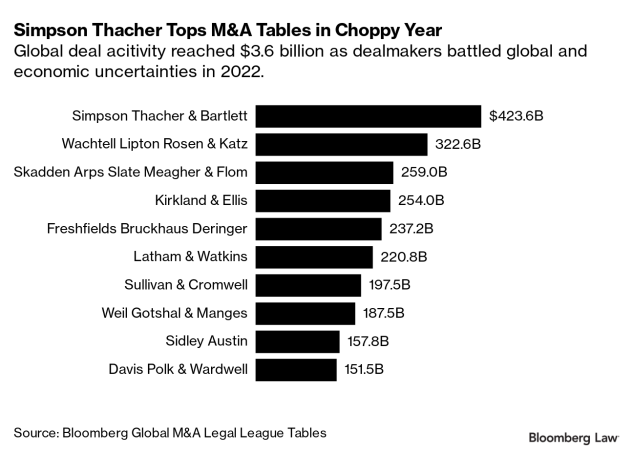 Perennial deal machine Wachtell, Lipton, Rosen & Katz landed in the second slot on the league tables for the year, advising on 74 deals worth $322 billion. It was followed by Skadden, which advised on 194 deals worth $258 billion.

“It still ended up to be a great year,” said Kimberly deBeers, head of Skadden’s M&A and corporate group in Chicago. “Dealmakers are putting on their creative hats and looking at how do we get this done, if it otherwise makes economic sense to do so,” she said.

Kirkland & Ellis and Freshfields Bruckhaus Deringer, which has made stateside M&A expansion one of its top priorities, rounded out the top five by principal.

Kirkland topped the global rankings by deal count by principal again this year, advising on 793 deals worth $253 billion. Cooley LLP, which last month announced more than 150 layoffs across its US offices, came in second, advising on 590 deals worth $85 billion.

Liquidity was very tight for long stretches of the year, making it harder to finance transactions, particularly for private equity, Aquila said.

“While strategic buyers were able to continue to finance transactions, the costs were going up and the ease of being able to obtain financing was far less than it had been in 2021, or even at the beginning of the year,” he said.

Banks were seemingly back in the business of lending by the end of the year, according to Aquila, and financing packages became much easier to put together.

”It’s all about the ability, whether it’s a strategic buyer or a private equity buyer, to be able to have access to obtain capital in a timely manner necessary to do the transaction,” Aquila said.

Some of the difficulties in the financing markets, inflation and rising interest rates, have to be factored into transactions rather than stopping deals altogether, deBeers said. The same goes for regulatory scrutiny.

Several of the year’s biggest deals are getting a close eye from the Federal Trade Commission and other antitrust regulators. The FTC in December sued to block the Microsoft-Activision deal, arguing that the tie-up would harm competition. Trial before an agency judge is set to begin in August.

“It is incumbent on us as advisers to help our clients get ahead of that and make sure they understand what a review could look like,” deBeers said of inquiries by regulators. “What types of questions could they get, and do they have good answers?”